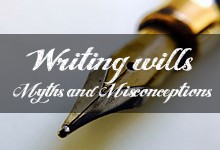 We have entered an exciting new year - with new challenges, things to be done, races to be won -  a year in which to strive for perfection and to pursue true greatness!  May this year bring new hope and confidence that things will turn out for the best.  Let us endeavour to grab hold of all the positives and let go of the negatives.

Congratulations to Carel Lock from Cape Town who won the 2018 EFBOE competition.  He had the most signed Wills in safe custody and had one “buite boedel” administered by EFBOE, which added to his overall win. Since the inception of EFBOE, Carel has secured 102 signed Wills in safe custody.  Well done Carel, keep those Wills and “buite boedels” coming.  We are sure that there are other advisors who are going to make the effort to lift you off your throne in 2019!

Lanie van Wyk from Vryburg was next in line, with Paul Louw from Port Elizabeth hot on her heals.  Well done to both of you.

WHY IS A WILL SO IMPORTANT?

If your client doesn’t have a Will or if he/she has an outdated one, this is a good time to draft a new Will or review an existing one.  EFBOE, as nominated executor, does not charge for the drafting or safe keeping of Wills.

There are several myths and misconceptions when it comes to last Will and Testaments.  We are going to look at a few of these:
The reasoning behind this statement is quite understandable.  The chances of older people succumbing to death due to natural causes are much higher than for younger people.  However, younger people have a higher risk of dying in motor car accidents or in other violent conditions.  Road deaths have skyrocketed in the world.  Statistics show that 80% of people that die in road accidents, fall in the 19 - 34-year age group.  Irrespective of age or health, no one knows when death will knock at their door.
Everyone is busy with their daily lives.  The busier we get, the easier it is to procrastinate. It seems inconvenient to have to make time to attend to a Will because there are other priorities that are deemed more important.  People also do not want to be confronted with their own mortality.  The consequences hereof, will have to be confronted by those who are left behind after death.  This is one of the most important documents a client will sign in their life time and is worthy of the effort and time spent in the drafting thereof.
This is not the case at all.  With a Will, you have the opportunity and choice to decide how to distribute your estate assets. You can decide whom you want to entrust your estate to and how it should be administered.  Without a Will, you die intestate.  The Law of Intestate succession regulates how the estate must be divided, which could result, for instance, in your surviving spouse only receiving a child’s share while they need the whole estate to carry on with life as usual.  There is no control over the appointment of an executor as the Master will appoint one and they will not be able to choose a guardian for their minor children.  Trustees will not be appointed to safeguard minors’ inheritances until they become of age.  Minors’ inheritances will be paid into the Masters’ Guardian Fund and will be paid over to them when they turn 18 years old.  If you weren’t married, but had a life partner, it could lead to severe controversy and even litigation between your life partner and your family.  There are no advantages to dying intestate, only serious disadvantages.
It is highly unlikely that a person has no assets - a motor vehicle, banking account, contributions to an employer’s pension fund and the accumulated value thereof, an insurance claim that the estate may have.  Even if there is no spouse, life partner or children, there could be parents, siblings or other close family members or friends. The reality is that someone will have to report the estate and help to wind it up.  With a proper Will in place, it is just a quicker and less stressful process for everyone involved.
A Power of Attorney that allows a person to act on another’s behalf, automatically ends at death.  After death, only the Master of the High Court can appoint an executor who must take control of assets in an estate.  Any authority or rights given to beneficiaries, for instance to draw money from bank accounts, to manage a business or to live in the house, falls away when a person passes away.
There are no specific instructions that a Will has to be drafted by a professional.  Before using someone else’s Will as a template or buying a generic one in a shop, however, be aware of the following general pitfalls:
Spouses, life partners or beneficiaries may need access to immediate cash while the estate is being administered.  Bank accounts will be frozen after death.  Therefore, beneficiaries or partners should have separate bank accounts and access to funds.  By getting all things in order and having a properly drafted and valid Will, money and time can be saved at a later and traumatic stage.
Not a good idea.  Life is not static, things change.  People get married, get divorced, lose loved ones, gain new loved ones, start businesses, sell businesses, buy houses, sell houses, become ill, get healthy.  Furthermore, new laws are introduced, the tax environment changes annually, businesses are affected and financial situations change.  All these changes affect an estate.  It is a good idea to revise a Will annually.

Keep in mind that the stipulations in a customary Will only come into effect after death.  If this important document is not in order and valid at the time of death, it is too late to rectify it then and the consequences will have to be borne by those left behind.

A LEGACY OF 250,000 NATIVE AMERICAN ARROWHEADS

A North Carolina couple, Moon and Irene Mullins, were avid artefact hunters and amassed a collection of Native American arrowheads starting in the 1930’s when the small relics were still scattered over the American landscape. They found their biggest hauls on farms and fertile lands where tribes built villages and left artefacts behind.  The collection consists of nearly 250,000 arrowheads, dating back as far as 12,000 years.  This collection is the most impressive and may be the largest private collection ever, especially with the changing laws that make it illegal to take arrowheads from public land.  Movie star John Wayne tried to buy the collection once, but Moon immediately turned him down.

In 1982, Irene died at the age of 69.  Jerry Williams and his wife moved in with Moon to take care of him and to keep the arrowheads safe, as Moon was worried that they would get lost if he had to go to an old age home.  Moon died in 1987.  He left the collection to his friend, Jerry.

Another friend of the Mullinses, Wayne Underwood, wanted to buy the collection from Jerry, but knew it was worth around a million dollars and didn’t have the cash for it.  After ten years, he struck a deal with Jerry to display the arrowheads in his museum called Mystery Hill and would pay one dollar from every ticket sold until Jerry passed away.  Over 40,000 of the arrowheads are on display in the museum. They agreed that when they reach the amount of $300,000, the collection would belong to Wayne.  Up to date, the couple has received nearly $400,000 (and still counting).  Wayne is planning a new building to house the full collection.